Relics of the old airport in Munich-Riem

Munich-Riem Airport was officially decommissioned on May 16, 1992 at 10:55 p.m. after almost 53 years of service, the operating license as an airport expired in August 1992.

In the place of the old airport there is now the New Munich Trade Fair Center, as well as the Buga Park, which is surrounded by the newly created trade fair city. 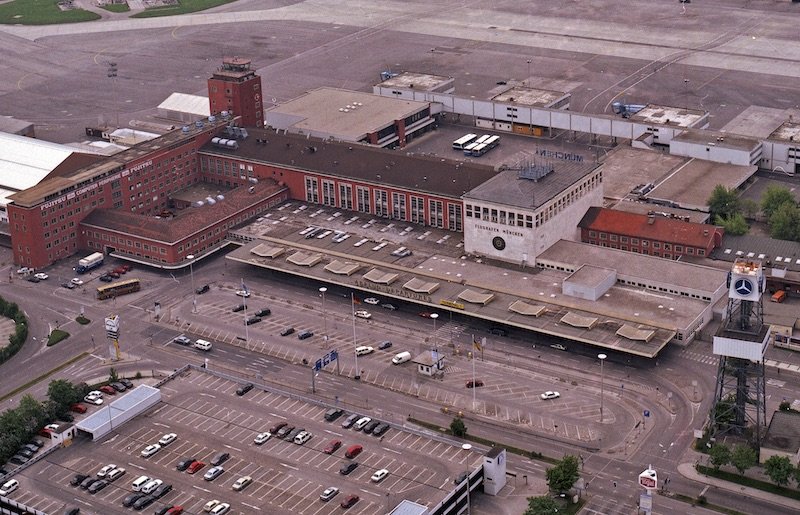 The old airport gives way to the Munich exhibition center

Immediately after decommissioning, the dismantling of the airport in Munich-Riem began, for example by November 1992 the boarding bridges and parking garages were dismantled. In the period from 1992 to summer 1996, the former airport grounds were used as a cultural center. Little by little, the last remains of the Riem Airport disappeared to make room for the new Munich Trade Fair Center and the trade fair city. For example, the Lufthansa maintenance hangar was blown up in November 1996.

The dismantling of Munich Riem Airport was completed in 1998.

Today the New Munich Trade Fair Center and the trade fair city of Riem are located on the approx. 500 hectare area of the former Munich airport in Riem. There are still a few remnants of the old airport:

Remains of the old airport in Munich-Riem

The eight-storey control tower was placed under monument protection in 1995 and stood free in the exhibition area of the city of Munich with 14,000 m2 of floor space until 2016. Various attempts to put the former airport tower and its surrounding open space to good use failed in 1995, 2006 and 2009.

In 2016, the tower was converted into a modern office complex. On July 11, 2017, the new BRAINLAB headquarters of Federal Chancellor Dr. Angela Merkel will be officially opened. The eye-catcher of the office complex is the historic tower.

The airport lobby, which was built in 1939 and opened in 1951 - also known as the Wappenhalle - was also listed as a historical monument in 1995 and is now integrated into a modern business center.

The Wappenhalle is therefore only accessible to a limited extent as a business center today and can be rented for events.

Coat of arms hall at Riem Airport near the Munich exhibition center. © Gelbmann

The Zeppelin grandstand, which has a slightly arched floor plan and is still around 530 m long today, is located on the west side of the former Munich Riem Airport. The dilapidated and collapsing grandstand was cordoned off in 2008.

Like the tower and the coat of arms hall, the grandstand and the front building were placed under monument protection in 1995.

The so-called head building is the former box office of the grandstand. Until the mid-1970s, there was such a head structure at the beginning and at the end of the grandstand. Today only the western end of Munich Airport remains. This was extensively renovated as a BUGA LOUNGE for the Federal Horticultural Show and with 530m² of usable space it could be rented for up to 500 people.

Since the middle of 2014 there has been no official purpose for the front building, the building can no longer be rented.

Former box office of the Riem auditorium, from 2005 BUGA LOUNGE

Remnants of the runway (SLB) / runway at Munich-Riem Airport

A piece of the old Munich-Riem runway was kept for an exhibition by "Ingold Airlines" during the Federal Horticultural Show in 2005 - or a piece that had been preserved until then was shortened (unnecessarily).

The area is located in a nature reserve and can therefore only be reached on foot or by bike.

Lines of the old runway

These are very hidden references to the old Munich Airport that are difficult to see from the ground.

For example, the lines of the old runway in Georg-Kerschensteiner-Strasse are embedded in the ground. The western part of the runway near the new “Flughafen-Riem-Strasse” can be seen from the air.

The departure sign of the Riemer Airport sealed in concrete in the Riemer Buga Park. The Abfugschild once enthroned in front of the coat of arms hall and is now fully accessible.

The old departure sign of the airport Riem is also on the lines of the old runway in the west of the old airport area, also near the new "Flughafen-Riem-Strasse".