The FC Bayern manager Uli Hoeneß and his friend Helmut Simmler wanted to watch the international match between Germany and Portugal in the Lower Saxony stadium on February 17, 1982. Together with his friend, the pilot and former ski racer Wolfgang Junginger and his 25-year-old co-pilot Thomas Kupfer, a student from Munich, it was to take a twin-engine Piper PA-34 Seneca (D-GIFL) from the Riem airport (MUC) to Hanover-Langenhagen (HAJ) go.

The then President of Bavaria, Willi O. Hoffmann, was also planned for the flight, but canceled early - the reason: the pilot Wolfgang Junginger only had problems in March 1979 due to an engine failure with a Cessna 414 and had to make an emergency landing in the Ebersberg Forest - the pilot the machine had not refueled enough. Several passengers were seriously injured.

On February 17th, the pilot Wolfgang Junginger and the co-pilot Thomas Kupfer boarded the six-seater light aircraft together with Uli Hoeneß and the publisher Helmut Simmler. 2 places remained empty. The Piper-Seneca started at 18:19 in Munich in the direction of Heitlingen / Hanover. The flight is calm, Uli Hoeneß falls asleep over Nuremberg. He had chosen the place in the far right.

At around 7.45 p.m., pilot Junginger reported difficulties over the radio for the first time to the airport in Hanover-Langenhagen.

The view is bad over Osterwald, a district of the city of Garbsen, it is uncomfortably hazy. The airport controller reacts quickly to the emergency call and advises the pilot to gain altitude again despite the approach that has begun, then to turn north and climb continuously. After that, however, the contact breaks off. At around 8:05 p.m., the aircraft disappeared from the air traffic control radar screen around 12 kilometers from runway 09C / 27C.

A major alarm was triggered in the control center at Hanover Airport. The police, technical relief organizations and the fire brigades from Langenhagen, Wedemark and Garbsen were alerted. Shortly thereafter, the Piper-Seneca felled the tops of some oak trees, crashed into a meadow, slid 100 meters and got stuck on a pasture fence. Uli Hoeneß was thrown far out of the rear right seat of the Piper in the impact. He was the only one not wearing a seat belt.

Around the same time, forester Karl-Heinz Deppe was sitting in front of his television that evening and watching the international match between Germany and Portugal. At this time, Deppe was monitoring a small area in the Heitlinger Moor, and because the game eventually got too boring for him, he switched off the television and set off on a control trip.

On the way he notices that a search is in progress. At about 9:30 p.m. he sees something crawling up out of a bush. Not an animal, as he first thought, but a human. It is FC Bayern manager Uli Hoeneß, covered in blood and with torn clothes, apparently in shock, comes up to him and groaned: "I'm freezing". The forester Karl-Heinz Deppe pulls Hoeneß into his car to drive him to the hospital. But the off-road vehicle gets stuck in the morass.

Deppe leaves Hoeneß in the car and runs into the next village to call 110 from a phone booth. 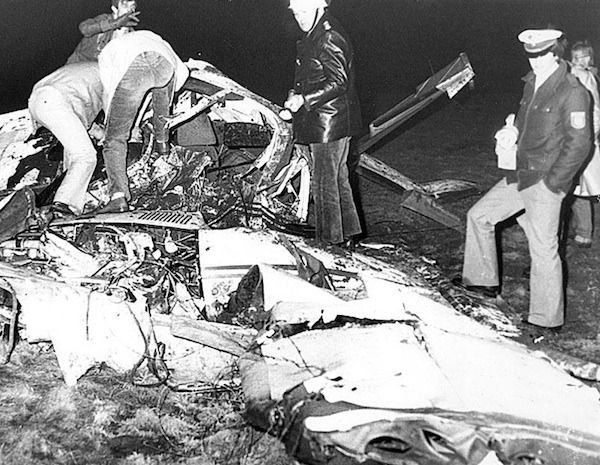 9:57 p.m.: Police and ambulance service arrive at the scene of the accident

At 9:57 p.m., the police and rescue services located the crash site. The rubble was spread out over a radius of over 100 meters, almost half of the cockpit had bored into the ground. The bodies of Simmler, Junginger and Kupfer were stuck in the seats, and they were disfigured beyond recognition.

The 30-year-old FC Bayern manager Uli Hoeneß is being looked after. Artificially ventilated, he arrives at the emergency room at KRH Klinikum Hannover-Nordstadt at 10:50 p.m. and is immediately taken to the intensive care unit. The diagnosis of the treating chief physician Prof. Dr. Otmar Trentz: Transverse process fractures on the lumbar spine, a concussion and a left-sided pulmonary contusion with hemorrhage and fractures on the upper arm and ankle. In addition, pronounced amnesia. Trentz: "Mr. Hoeneß can no longer remember what happened in the crash."