On November 9, 1948, the civil aviation department of the American occupation forces appointed the American pilot Charles D. Daily to the administrator of Munich-Riem Airport.

The Daily used by the HICOG starts its service in Munich-Riem. The USAF pilot wears civilian clothes, but according to eyewitness reports, he is said to have strapped a huge Colt under his jacket.

The Colt and also the distrust between the American administrator and his German employees are quickly put aside. The new man at the airport management quickly turned out to be a stroke of luck for Riemer Airport, because Charles D. Daily was committed to the rapid reconstruction of the airport from the start.

Just 5 weeks after his appointment as airport administrator, he presented the state capital of Munich with a comprehensive and groundbreaking report on the “physical characteristics of Munich-Riem Airport”.

In the report, he recommended that the city of Munich accelerate the restoration of the airport facility and the construction of a concrete runway with a length of 2000 meters including the necessary airport lighting.

During his stay in Germany, Charles D. Daily lived with his wife and 3 children at Hochleitner Strasse 21 in Munich-Harlaching. Over the years, Daily maintained a close and friendly relationship with the liaison man and future FMG managing director, Wulf Diether Graf zu Castell. 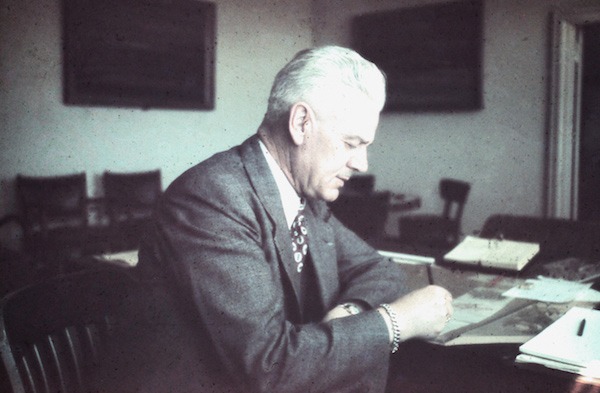 On June 7, 1952, the American airport administrator Charles Dennis Daily returned to his homeland after 1306 days of service and left his successor with the formal supervision of an efficient airport.

Back in Kansas City, Missouri, became the commanding officer of the 442nd Troop Carrier Wing on the Daily Richards - Gebauer Air Force Base near Kansas City. He served there until his retirement in 1962 and can look back on well over 30,000 flight hours.

Charles Daily died on June 8, 1972 at the age of 73 at the Research Medical Center in Kansas City, Missouri