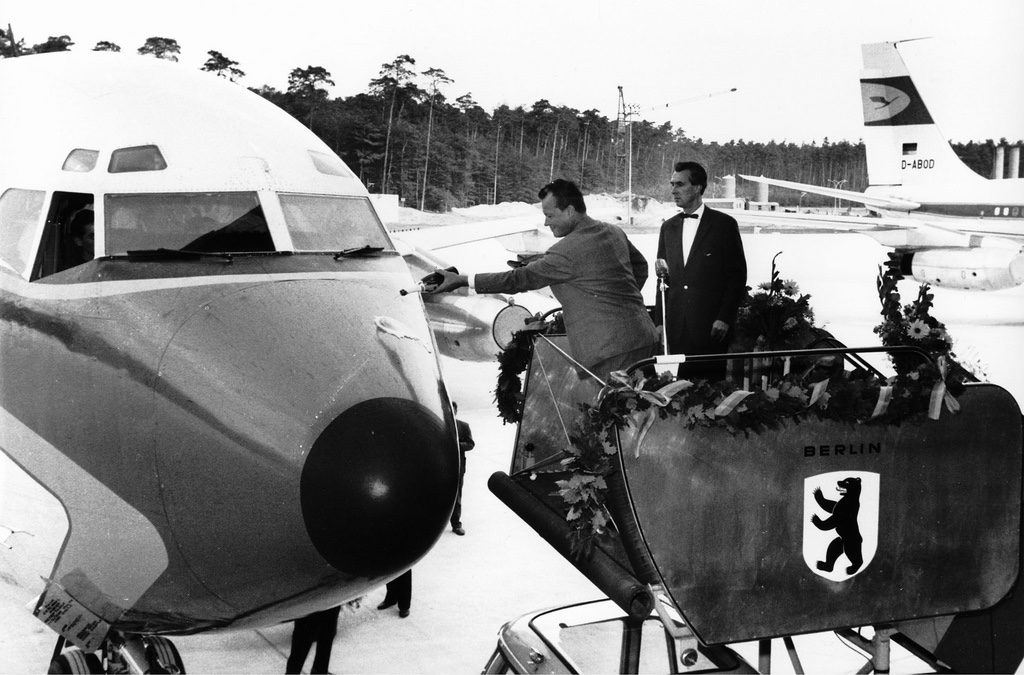 In 1960 the Boeing 707-400 D-ABOC was christened “Berlin” by Willi Brandt, today the good piece stands on the edge of Tegel Airport and rots there. We clarify why and what the D-ABOC “Berlin” has to do with Munich Airport.

Historic start into the jet age

It was the time of the economic boom and on January 23, 1957 Lufthansa ordered four Boeing 707-400s. On September 16, the D-ABOC was ceremoniously christened Berlin by Berlin's ruling Lord Mayor Willi Brandt - one day later, the plane officially started the scheduled service of the crane airline and at the same time heralded the jet age for Germany and Lufthansa . The "Berlin" was in active service with Lufthansa and Condor until 1977 and was then sold.

On the occasion of the delivery of the 200th Boeing to Lufthansa, the aircraft manufacturer Boeing wanted to give Lufthansa a present and flew the "Berlin" back to Berlin. The landing of the historic crane in Tegel in November 1986 was a sensation and the then incumbent mayor, Eberhard Diepgen, received the Boeing 707 with a ceremony - also as a triumph over the exclusion of Berlin from German aviation.

Lufthansa donated the machine to the city of Berlin (the Deutsches Technik Museum) and in the spring of 1987 the good old D-ABOC was back home in the parking lot next to the terminal in Berlin Tegel.

5 years later, the Berlin 1991 had to be moved in front of the left roundabout next to the “SM” taxiway. In 1998 the machine was moved to the fire extinguishing station in the north, inaccessible to the public, and in 2000 it was hidden in its current parking position at Adlerweg, where it has been rotting and rotting for 14 years.

Reader Michael Donati from Berlin-Reinickendorf provided us with pictures from November 2014:

The external condition of the once proud aviator, however, was apparently also a thorn in the side of the donor - Lufthansa. At least it stands to reason that the airline had the Lufthansa branding removed on September 10, 2006. The Lufthansa lettering was simply painted over with white paint, although this measure is no longer very effective today….

I guess that's true! The D-ABOC, which is located in Berlin, is a "cuckoo egg".

Because the original D-ABOC with S / N 17721 was, as already mentioned above, taken out of service by Lufthansa in 1977 and landed after a few intermediate sales in 1983 with the registration EL-AJC at Bournemouth Airport BOH.

The original "Berlin" was deregistered there and partly dismantled and used for fire brigade exercises until 1985. Then the original was finally scrapped.

Nevertheless, the Boeing has an exciting history to offer: It was one of the 4 machines that were hijacked by the PFLP on September 6, 1970. However, the El Al managed to escape the hijacking. The pilot of Flight 219 directed one Parabolic flight one that literally let the two hijackers "tip over". The kidnapper Leila Khaled is overwhelmed and arrested after landing in London. Her Nicaraguan-American companion Patrick Argüello is shot dead by a security guard on board.

The Israeli machine, which today stands in Berlin as “Berlin”, was given an old LH paint job at Ben Gurion Airport (TLV) in 1986. Was then pasted over and transferred with the US Reg. N130KR in November 1986 by a Boeing crew via FRA to TXL.

The US registration and pasting over were necessary because the air corridor to Berlin was still closed to German aircraft before reunification and a ferry flight with the "Berlin" from FRA to TXL would not have been possible.

In Berlin, the Arkia / ElAl interior of the Boeing 707 was lovingly exchanged for Lufthansa equipment and in the spring of 1987 it was put in the supposedly last position. Unfortunately, the new "Berlin" was always in the way, which is why it is now falling into disrepair at the edge of Tegel Airport.

Various rescue attempts, for example by the “Pilot / Controller Club Berlin” (PCCB), also failed. The pilots' association had tried to sell 50-Mark shares in the Boeing 707 in order to finance the maintenance.

In addition, a Cologne restaurateur had applied for the machine and wanted to convert the Boeing 707 into a restaurant. Allegedly, this is still being negotiated today - but the health department is now likely to want to express major concerns.

However, the machine shouldn't have rotten in Tegel at all. The former managing director of FMG - Willi Hermsen claims to have been committed to bringing the "Berlin" to Munich - at a time when the machine was still in good condition.

Transport would certainly have been associated with costs, but Munich Airport has a well-functioning visitor area that would have reduced the costs for transport and maintenance sooner or later to an acceptable level.

A Douglas DC-3, a Junkers Ju52 and a Lockheed L-1049 G, among others, are on display in the visitor park at Munich Airport Super constellation displayed.

Not that we get ourselves wrong!

The machine could of course have stayed in Berlin - but moving to Munich might have been a good alternative to preserve this symbolically made available “Berlin”.

And of course there are more important things than keeping old airplanes (warm apartment, work, warm food) - but in my opinion the D-ABOC was simply senselessly burned due to political or bureaucratic hurdles and the whole effort was spent on “Berlin” for a short time To bring a euphoric moment to Berlin, in the end just pointlessly expensive. Pity!

If you still want to look at a 707 from the early days of jet aircraft, you will find it at Hamburg Airport. The sister machine D-ABOD has been refurbished and parked there as “Airport One”.

Unfortunately, the website of Hamburg Airport is not completely up-to-date at this point, the machine has now had Lufthansa paint again. Incidentally, the plane got the not entirely official name "Airport One" through participation in various films - including a Bavaria film as "Air Force One" disguised at Riem Airport.