Commissioning of the new runway

On November 22, 1949, in addition to the airport restaurant with ballroom, beer parlor and sun terrace, as well as 10 new hotel rooms directly in the airport, the new 1907 meter long and 60 meter wide runway at Munich Airport went into operation.

Aircraft with a take-off weight of up to 140 tonnes can take off on the new runway, which was manufactured using a bituminous construction method and hardened using a special process. For the construction of the railway, which lasted 5 months, around 160,000 cubic meters of earth were moved with 350 workers under the leadership of the Munich Road Construction Office.

The set production date before the impending frost period seemed unclear until the end: On November 18, 1949, i.e. 4 days before the planned opening date, the management of Flughafen München-Riem GmbH wrote to the Department for Economics and Transport of the City of Munich:

Mr. Daily has made repeated promises to the people of the now busy construction companies, who are currently working at full speed, that if they finish on time they will receive beer and liquor. Today he was reminded again by a foreman to keep his promise. We therefore suggest that the company invite the workers to a party and then give them 2 liters of beer and 5 cigarettes per head in the check-in hall. There are around 60 workers.

The "MASSVOLLE" acceleration did not miss the target….

The opening ceremony began at 2:00 p.m. with musical accompaniment from the Chamber Orchestra of the Handel Conservatory in Munich under the direction of Kapellmeister Karl Hackel. This was followed by the greeting of the guests of honor by Minister of State Otto Frommknecht. Further speeches followed by Thomas Wimmer, Lord Mayor of the City of Munich. The head of the civil aviation department HICOG (High Commissioner of Germany), Mr. Johnsen and the incumbent Prime Minister Dr. Hans Ehard.

At around 3:00 p.m., Mayor Thomas Wimmer cut the barrier tape, clearing the new runway in Munich. The first aircraft to take off was a Convair Liner from the Dutch KLM, which made this aircraft available for a sightseeing flight for the guests of honor. 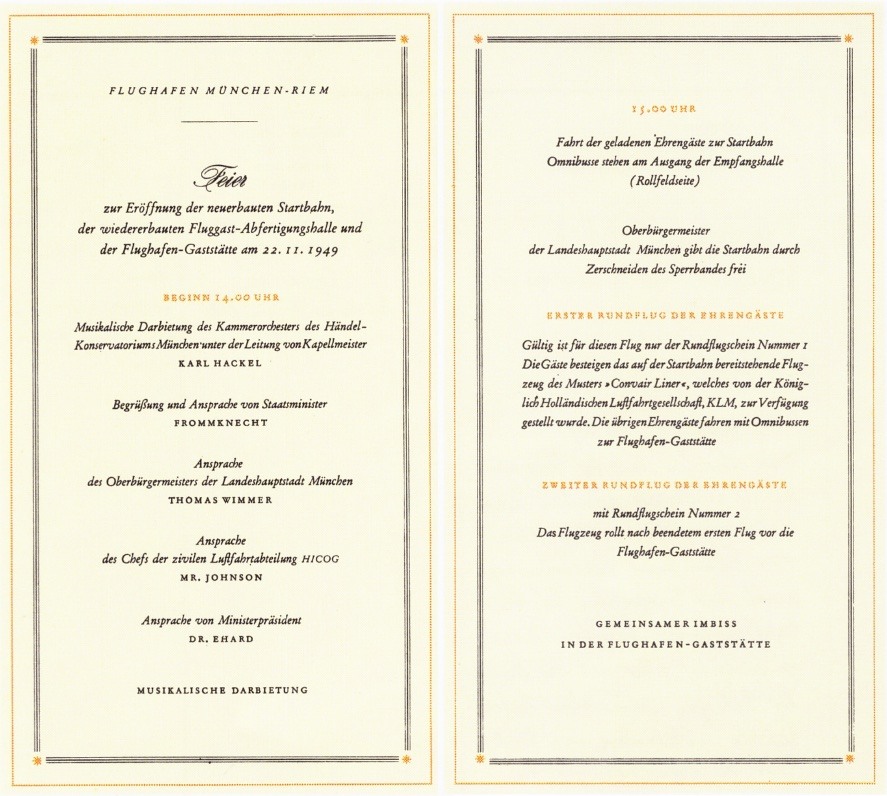