The locations of the historic premiere are to be the Hamburg and Munich airports, from which two Lufthansa planes are to take off at the same time on April 1st. The Convair-Liner 340, which flies from Munich via Frankfurt and Düsseldorf to Hamburg on April 1, 1955, takes off at 7:42 a.m., one minute earlier than the machine traveling in the opposite direction, which is in Hamburg at the same time starts. On the occasion of this celebration, the airport director, Graf Castell, as host, personally hoists the flag of Deutsche Lufthansa at the Riem airport. 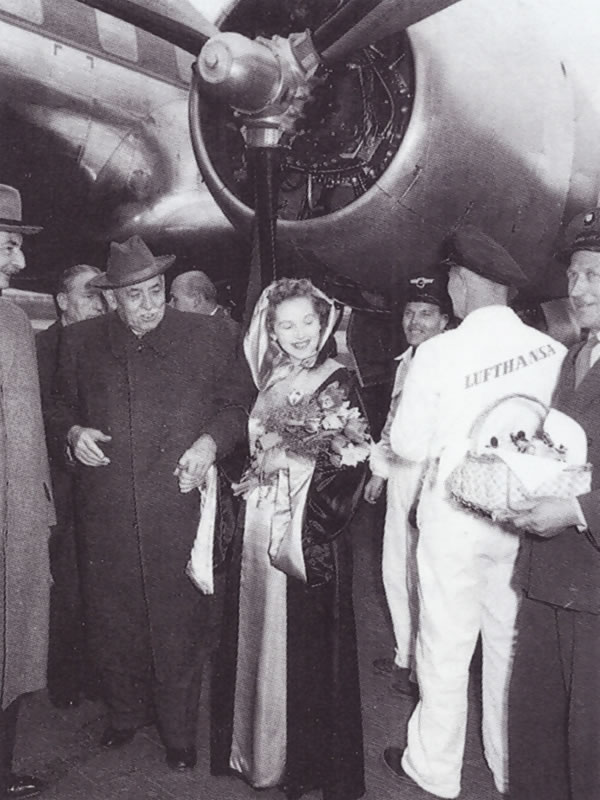 Scheduled scheduled services from Munich opened on April 1, 1955 in the presence of the then Mayor of Munich and Chairman of the Supervisory Board of Flughafen München-Riem GmbH, Thomas Wimmer

With this event, the cranes start and land in Riem twice a day on this inner-German route.

At this point in time, Lufthansa had four twin-engine Convair 340s which, with an output of 2 x 2430 hp, reached a cruising speed of 460 kilometers per hour and had a maximum range of 2670 km for the internal European route network. 44 passengers found space in the Convair 340.

For transatlantic flights, Deutsche Lufthansa operated another 4 "Super Constellations" at this time. The four engines each had an output of 3300 HP, which enabled a cruising speed of 530 km / h with a range of 6400 km. 59 passengers were able to fly with the Supperconny - one of these machines is today on the visitors' hill at Munich Airport. It is a Lockheed L-1049 G Super Constellation D-ALEM, which took off on June 8, 1955 for the memorable 17-hour inaugural flight with a completely German crew in Hamburg. The flight led from Hamburg via Düsseldorf and Shannon to New York-Idlewild.