The Olympic closing ceremony began at half past seven in Munich. Joachim "Blacky" Fuchsberger moderated into his microphone: "The games started cheerfully - they end seriously."

“Minister, a few minutes ago an airplane was stolen by Arabs in Stuttgart. It intends to bomb the closing rally ”. 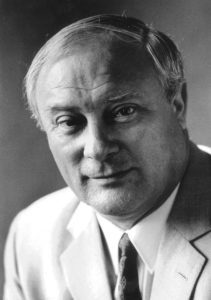 Leber then tried to find out more information: Air traffic control confirmed to him that an unidentified object at an altitude of 2,000 m about eleven miles northwest of Ulm has been slowly heading east since 8:03 p.m.

After a few more agreements with air traffic control, Defense Minister Leber ordered the start of the alarm squadron of Jagdgeschwader 74 from the airfield in Neuburg an der Donau. Two armed fighter jets then mounted towards the Olympic graduation ceremony. Two minutes after the ascent of the fighter squadron, the air surveillance reported: The unknown aircraft is no longer on the radar. Presumably, the hijackers went low to fly below the radar.

In the meantime, leading politicians in the Olympic Stadium received discreet information about the terrorist warning, and some of them left their seats. Joachim Fuchsberger also received the following message from director August Everding:

"Unidentified objects in flight approaching the Olympic Stadium - possibly bombing - say what you think is right."

Joachim Fuchsberger looked up at the sky and saw the two fighter jets thundering over the stadium. He later reported to the Süddeutsche Zeitung:

“I was the loneliest and shitty person you can imagine! Asking 70,000 people to leave the stadium? But to keep calm? A mass panic with unforeseeable consequences would have been inevitable. "

Fuchsberger decided not to say anything because of the fighter jets present and continued with the program. Meanwhile, air traffic control was able to make out the unknown aircraft near Augsburg on the screen: It was still navigating at an altitude of 2,000 meters with the destination Munich.

While the situation in the crisis team worsened dramatically and a decision to push away or even to shoot down the unknown aircraft seemed almost overdue, the tide changed:

Air traffic control received an emergency call from a Finnish passenger plane, which reported problems with the on-board technology. Due to the failures, the pilot of the DC 9 asked for a landing permit in Munich-Riem. The Finnish DC 9, with more than 100 people on board, was then identified as the “unknown aircraft” and was able to land safely at Riem Airport some time later. The plane stolen in Stuttgart, however, never appeared again….

“At most two minutes later, this process, which now sounds like an episode, would have taken a different course. My own world would have looked completely different three minutes later. (...> If I had given the order to the two interceptors at this point in time and the unknown aircraft had not simply let itself be pushed away from its target, then weapons would have to be used at this point. (...) I have not in my life always as lucky as on that evening of September 11, 1972. "